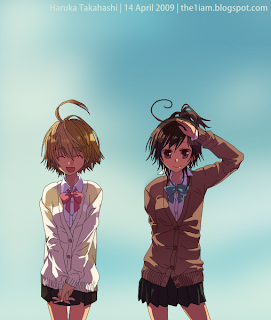 Lately, I have been trouble coming up with something to write here that I think I need a long break or reduced intervals of what I'm doing. That's why you hardly see any non-story related posts here.

Unless I have the time, my next vector could be a long time away from the latest (v0074; right). The regular interval is once a week. I might still do the stories here. Which story I would do, however, is quite random. I might even modify the earlier parts. You would know that it has been modified by the date I place at the top, though minor things like placing a link to a following part won't be counted.

Well, this break won't start immediately though, probably from somewhere after the first week of July onwards. I probably won't come on much, seeing that internet access would be either be very limited or expensive. This also means that I might not be able to watch any Summer (or complete 24-episode spring) anime. The earliest I hope to be back would be by this Autumn this year, latest would be before my 22nd birthday. The awkward thing about the time I was born is that I could be born on a completely different day in the GMT/UTC +10h timezone onwards.

Where would I be going to? Well, it's a secret, so big that I won't mention it when it's over. What I can say is that it would be with someone I know from somewhere well and would meet a lot of new people. Can't guarantee that it would be a happy experience though.

And no, although I would like it to happen, I won't be married in that time frame as I'm not financially ready. Neither will I know if the people i will/have meet/met are suitable for me. With the country's declining population, ending up with a foreigner as my partner and having 2 or more children is a possibility. I could even be that foreigner. Erm, why am I even mentioning my personal things? Could be because I wrote a lot of stories from the main characters' point of view. (^_^;)

Time seemed to have passed by a lot quickly than when I was younger. I thought I was watching anime (using it as time reference) like "Suzumiya Haruhi no Yuuutsu" (before it became popular), "Welcome to the N.H.K", "Darker than Black", or "Lucky Star" (again, before it became popular) not too long ago on TV. Notice the titles I mentioned are 2006/2007 anime.

This post turned out to be longer that I thought it would be.
notice