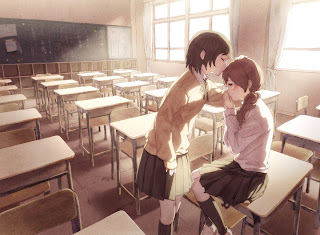 When the time comes to heading to sleep around midnight (午前0時/12am) there's thers's the feeling of fear when the thought of sleeping itself gives me the fear evem though I know I should take a rest and wake up early the followimg morning. It's also one of the reasons why I stay up quite late.

Despite this, my body is forcing me to sleep even though I don't want to.. It's like during a long ride in the train or car (as a passenger) where if a person were to be looking at me, I would appear to be sleeping and letting the motion of the vehicle move me around (and maybe having my head on the person next to me from time to time) aimlessly. Since I might be mentally awake, I can actually hear and remember clearly what people around me are saying. Makes me feel odd when they say that I'm sleeping but had trouble moving myself. If I'm lucky, I would be able to say what I want to, but in a sleeping tone, giving the impression that I'm sleep-talking.

There are also times when lisening to music through the headphones when I suddenly found myself to be waking up from sleep when I didn't even know I was asleep. The time is a proof of this. Despite all of this, I don't have insomnia.


PS. I'm typing this 2 meters away from the screen while lying down and can'r really see the errors I might have made above. I'm also watching the IOC announcement of the host city of the 2016 summer Olympics at the same time. (Wasn't even aware of it until someone at Twitter mentioned it.) They have not announced the city yet as at the time of typing, with only Rio de Jeneiro and Madrid left. It's a shame that Tokyo had dropped out: I had put up the support widgets here last year.