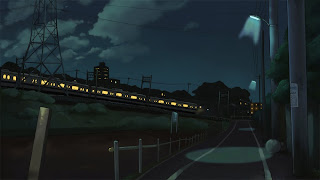 Kotomi seem to know how the device I made better than I know it myself. How is that possible? Well, she was forced into this dimension and know she was about to die by something she can't control... I feel sad for her. It's like no matter what different things she tries to do, the end result is the same.

At work, I'm working with a branch at Gunma prefecture to further develop the device. I do the programming and a bit of research, while they do the testing and further research. The reason my supervisor gave me was that I'm "too valuable" and that the bad guys do not have a presence outside my city. "Too valuable"? What does he mean by that? Either way, it has already caused a lot of trouble for the rest of my life than anyone has even been through and not want to go through it again. I hardly get a hold or hear of the device lately. It belonged to the company in the first place to begin with.

Around the end of November, the people contacted me again. They said that they have added a feature that allows me to view different dimentions at any place and time. (By default, it's set to the current dimension and place.) I'm confused as to how it even works because, for example, in my current dimension, I can see myself holding this thing from behind clearly even though I know that there isn't any camera over there. There's also text at a corner saying that I'm viewing the current dimension.

Huh? There's an another dimension that's quite identical to the one I'm in now? Because it looks the same, but yet different. What is the difference then? I can't tell, apart that I'm not looking at the current dimension. Those guys are telling me that they are working on the time part, so I can't go any further than 1 hour from the current time.