I don't know what have I been doing lately that is making me sleepy and tired. I haven't been doing anything mentally or physically stressful to the point that I can't really think. Even if I could, I would be too sleepy by then and forgotten all about it by the time I woke up.

Haven't been posting much lately too. For the anime reviews, Railgun 6 is posted right after Railgun 5. As at the time of typing, Railgun 8 should be airing in a few hours, but I haven't even started Railgun 7.

I've lost track of what anime episode I had watched that I don't know how far behind it is, on top of anime like Kobato having some long break between episode 4 & 5. (Above image is from Sasamaki Koto ep7) I know IE9 is being officially planned, Google releasing some official info about the Chrome OS, Microsoft bans hundreds of thousands of modded Xbox 360s, Danny Choo now up to something, YouTube planning to release 1080p videos, and it's just too many things to keep up, but I didn't mention anything about it in the technology blog. 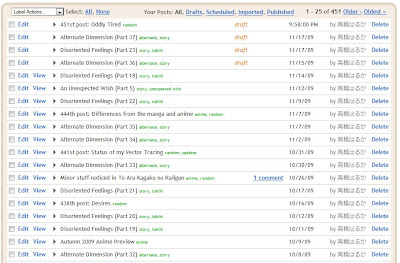 You may be wondering why is this post numbered 451 instead of 448 since, if you counted, the last numbered post is 444. No, I didn't skip numbers. The right screenshot is what I'm seeing now: I have unpublished stories that are not yet completed. It in fact follows the number you see at the top right (+1 when creating a new post). Come to think of it, I hardly post any non-story posts lately, partly because I tweet more frequently. You might also have notices S3P23 and S2P37 on 17 November, which are partially done as they are done from my phone, but with no references to earlier parts accessible at that time.

Speaking of accessibility, the current theme at my WordPress blog seems to have a mobile phone version, which is kind of useful. Main reason why I'm not moving there is that it doesn't allow me to insert any code I want without it being stripped down to the point that it's broken, edit the CSS of the theme without paying, confusing interface, and so on. I do sometimes use it to archive the stuff here and upload vector PDF version (instead of the PNG raster) of my traces.