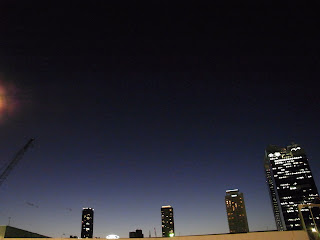 It wasn't that far from the hospital to my former house by car. The house still remained at its run-down state. I never talked about my parents because they have been away for so long and regularly that I don't really know them other than me looking like the both of them.

Itsuki: "Mom? Dad? I've brought someone with me."

A couple whose faces resembles some of me appeared. Yes, they are my parents, but, strangely, I still don't know their names after all these years since I only called them mom or dad. Other people would call them Hisakawa's wife/husband or just Hisakawa-san.

Mom: "Oh? A guest? Is she your girlfriend? I thought you already have another of the same age."

She was talking about Kotomi. It seems that Itsuki has brought her here with my parents around before. As for dad, he looked as though there's something about me.

Itsuki: "You see, this girl was me right until the may of two years ago, according to the higher-ups at work."

Me: "I was working on something when something happened and i was transferred to an another world. A lot of things happened there, but when I tried to return back here recently, a problem happened that caused me to remain what i was back there as a new person."

On top of that, I also told them about the times we had when I was younger.

Itsuki: "I swear, I didn't tell her to say those beforehand. I'm the other half that goes through as though that event never happened."

Dad: "So that means she is Itsuki too?"

He said that in disbelief. Me appearing out of nowhere in front of them, claiming to be their daughter that, except for the feminine features, resembles a lot like their only son, can be a big shock to him.

Itsuki: "Yes, she's the other half of me that was transferred to an another dimension where I was born a girl and is later cloned there, but that cloning machine transferred her mind to the clone's body at the same time. Because of that, she didn't really reunite with me as she wasn't in the original body at the time she traveled back to our dimension. She even has the same thumbprints and iris patterns as me,"

This was a white lie so that my parents don't get mad about my choice. I did ask for it, but I did not expect to actually happen. I still don't know whether I should be happy about it though.

Mom: "So that means will you be staying here?"

Mom: "Since you two are of the same person, I don't mind."

I sensed that Itsuki was jumping in excitement in his mind.

With mom's approval I headed to the room. It has minor changes since the last i was here ages ago. I also saw some photos taken during graduation. I saw a happy Kotomi with him in most of the photos. I miss being with her. I probably won't get to see her until 3 to 4
years later.

We stared at each other, at a loss of words to say. He is me, and I am him, but I don't talk to myself. Itsuki is thinking of the same thing. Now what? I bet he's staring at me harder than I am staring at him since I went through the gender change and is finding hard to believe that I was a part of him or is jealous that he's not the part of myself that went through what I did. Uh oh, he's seem to become lost in himself while looking at me and I'm starting to blush the longer I stare at him. We know the both of us are the same person, but what the hell is this feeling? I can't fall in love with myself like this, but our bodies can't tell that apart.

Me: "Before we unknowingly get attracted to each other, let me remind that I was you. Although Kotomi was my girlfriend, you can have her since I'm now a girl myself. Besides, she's attracted to the male version of me, which is now you. She has seen me as a girl when we
were dragged to the other dimension, but she doesn't seem to be interested in me as i am now even though she knows who i was and it was her desire to turn me back anyway."

I started to cry as i said that.

Sunday morning came. Time for breakfast came rather quickly and I found myself already eating at the dining table. I missed eating together.

Me: "Well, I still have homework to do. I should be going now. The house nearest to my school is quite far."

It seems that my parents were still too surprised by my sudden appearance to notice that I am still in high school while Itsuki (the other me) has already graduated.

Itsuki: "Do visit us again from time to time. See you."

Back in school, there has been rumors flying around about an expensive car showing up outside the school and a female student of the school seen entering it. Before that she and the driver were talking on familiar terms, which sent everyone wondering who the rich girl was. My school is just an average one with students mostly from middle and low income families. A high income one would surely attract attention. They are obviously talking about me, but those who
saw me back then didn't know who I was.

During club activities, those fans of mine were again hanging around outside, sometimes disruptive to the point that the the teachers have to bring them away. The other members don't seem to blame me as the cause of it though.

As the days passed by, my popularity has been mysteriously increasing for various different reasons.


At the research institute, people have now noticed me appearing there to frequently, especially when I've gotten too lazy to wear the white coat or the staff pass.

Person A: "Excuse me little miss, i can't help but notice, but what would you be doing here that makes you come here everyday?"

I knew this would come one day. I lazily showed the pass I should have been wearing. He examined my pass closely and kept looking at me, before exclaiming in shock.

Person A: "Y-you are the mysterious owner of this place whose name appear in the
company history?!"

"Mysterious owner"? "Company history"? What are you talking about? Well, before May 2005, I could only know my history as Itsuki, not Saeko of the other dimension. I also saw my name in a gallery around here when I first came here.

There are so many things about myself (as Saeko) that i don't know, like how I came to be so rich with money flowing in much faster than I could spend or give away.