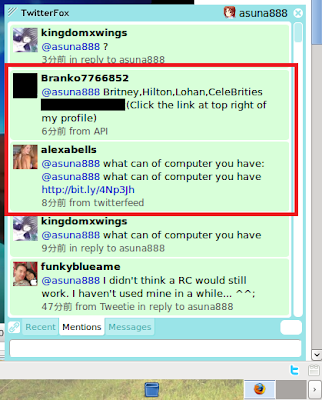 Barely an hour ago, I replied to someone about Win7 RC being still usable until mid-2010 who commented on a screenshot I put up earlier when not too long later, there are some odd replies highlighted in red. Spambots obviously, they're worse than followbots.

(I know TwitterFox is now called echofon, but that screenshot was taken in Firefox 3.0.15 for Ubuntu 9.04. I hardly use it (or Win7 RC) lately. I sometimes log into Ubuntu to do my vectors as it detects the scroll feature at the side of the trackpad that mysteriously stopped working when I applied SP1 on the primary OS (Vista).)
random