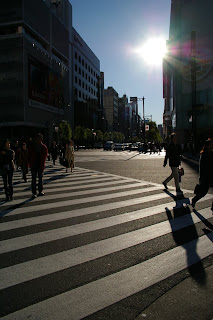 Whenever I go to a quiet area of a department store for a while, browsing through the things there, I would notice that there would be more people than it would be just earlier.
An example would be earlier this week, I had went to a bookstore to by a book. The queue was rather short when I entered. After picking a book and headed to the cashier to pay, there was suddenly a long queue of people waiting to pay. I went to the other end of the store (it's very big), but to my dismay, it's quite long too. Good thing the queue moved quite fast.
Latter that day, I went to another store. As Christmas is getting nearer, this would mean the place having a larger-than-usual crowd. I look around the store and then grabbed some food and drinks. At the cashier, there was another long queue of people waiting to pay. I looked through the batteries to see if I have the need for battery sizes other than the regular 単3形 (AA size) batteries. That was when I noticed a cash counter hidden from view that only has one person at the queue; in sharp contrast to the other counters that had long queues.
I went there and soon it was my turn. Guess what? People started queuing behind me! The queue was as long as the other counters when I left.
I don't know why this happens myself.