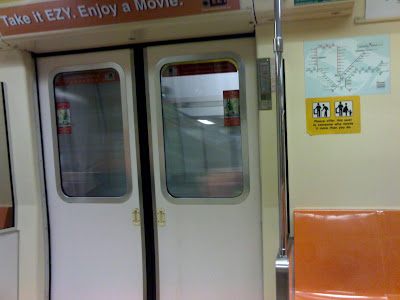 I don't know what happened during the conversation, but Haruna, Saeko (my original self), Aiko, and someone called Kyousuke, stayed behind to stay behind. The rest of us took a train to a hotel in the city area before heading out to explore the rest of the country during the rest of our stay there.

At that time however, a white light seem to come from my wrist and I suddenly found myself in some office of what appeared to be the the hospital I was warded at not too long ago. The place is filled with mountains of books and research papers lying all over the place. This isn't the first time that being suddenly transported to another place and time has happened to me, but it is in this cloned body of myself that I now find impossible to move, including my facial expression or using my vocal cords to speak. Unfortunately, the wheelchair that helped me to communicate with others has disappeared off to somewhere, so basically I am lying on the messy floor helplessly like a dead body.

I hear familiar voices in the distance, but I can't put a finger on who they might be. The conversation sounded somewhat serious and possibly what it might had been if I had stayed around at that house. Based on what I heard, the situation is similar to mine and very sad in some ways. (I also heard a mention of a notebook by me on the day of the hit-and-run incident.)

One of the voices, and footsteps belonging to him, got louder and louder. I then saw the face of one of my colleagues, that I had knew since before I entered this dimension but still don't know his name, in my view. He said that he was wondering what the white light he saw was. I tried to reply, but my body did nothing. He did, however, notice that I was trying to say something and carried me to somewhere like he's my prince. While being carried around, I saw Haruna sitting at a corner of the office, appearing to be confused with herself. 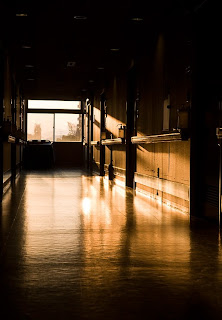 The room he brought me was filled with water tanks similar to what I saw at the back the secret underground laboratory in school; like out of a science-fiction/futuristic movie where they are used to analyse the body status of the person in it. The lights of this room were only illuminated by the lime-green light from somewhere at the bottom of these tanks and the display screens hung up on the wall. I have no idea what those are for.

He changed me into some kind of swimsuit that felt as though I wasn't wearing anything. My thirst, hunger, the urge to go to the toilet, or even to "play with myself" have disappeared completely from that moment on. (Not sure if that is a good thing.) The suit was so tight that anyone would not even be able to remove it, as though it's now part of my body.

He then attach wires of some sort on my head and odd places of the swimsuit (eg. there is a connector of some sort around my belly button for some reason which appears only when a connector is close enough) before I was put into one of the tanks. I don't know what he did next exactly, but I do feel some pulses all over my body and my arms and legs are moving around randomly by themselves. I think I also heard my voice saying gibberish and sounds I didn't know my vocal cords could make at one time, but I wasn't saying anything at all during that time.

The next few hours has passed by with a lot of useless knowledge that came from nowhere, visions of things I never seen before, and my body doing random stuff that I have no control of. I know that I met him a long time ago and that I am the clone of myself, but what exactly is he doing with me?

Next thing I knew, I was outside that tank with clothes I was wearing earlier on, lying on some kind of bed in the same room. The "swimsuit" from earlier, however, is (to me) visible underneath those clothes. What was he thinking? He never even say! 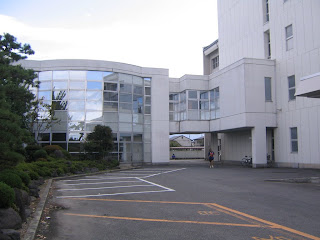 I noticed that I am now able to read and see what my other self (of the time plane I was from) is doing. The reverse is probably true too, seeing that she was searching for me at my room back at the hotel in the country Haruna brought me to and suddenly know where I am.

I also noticed that I was able to move and speak to what it was before the hit-and-run incident, which was also the day I (unknowingly) cloned myself. I tried to quickly get up, shout and jump for joy, but my body moved rather reluctantly, and my shout did not sound enthusiastic at all, which poorly reflects what I feel inside. In fact, the tone sounded rather monotonous and I heard myself automatically saying stuff like "as Mamiko shouts for joy" right after I'm done talking for some reason. In fact, I was surprised when I heard myself saying that as it wasn't there prior to the incident. Well, at least I am able to move now and still retain the ability to transmit my thoughts by the airwaves that still reflects exactly what I want to say.

My colleague said that this was the best he could do to "fix" me. He added that the mind-reading with my original self is real-time, but there might be time lags by even a few seconds if we were to meet each other after one of me were to stay still while the other travels by airplane or even the subway a lot. He did say something about the phenomenon being the same as travelling at the speed of light, which may explain why the time on the watch and the time on the wall clock (assuming both are working fine and both were set at the correct time at the start) would be off by a few minutes, with the watch appearing to be behind time, but the person wearing that watch has actually travelled into the future by whatever the overall time difference since the start, which is usually only a few minutes or seconds. Speed and duration affects the rate of difference.

My colleague said that I should head back to the time I was from as there there is already another me (the cloned one) and added that the rule of thumb about time travel is not to let their own past selves see the future self (the reverse, however, is allowed) or do stuff in the past that heavily affects the present, like preventing your own parents from being met. There is however, a warning on how on what I do when time travelling and how exactly it would affect the present (a big red warning if it affects my existence). 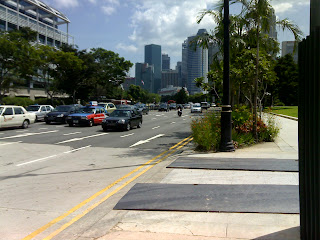 He then did something with the device on my wrist, followed by a blinding white light. The next thing I knew, I was on the roadside of a street with the hotel I am staying at visible in the distance. I noticed that I was sitting on the wheelchair that had disappeared earlier, but it's kind of useless, now that I can move by myself. I now make my way back to the hotel and hope they are still checked-in there.

I think I heard loud screeching and sounding of the vehicle horn at the time I found myself here. I wonder if it has anything to do with me appearing here out of thin air...