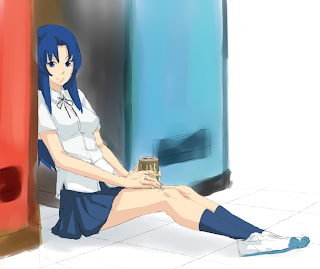 Looking through my vectors and the numbering of my stories, I had spotted several mistakes that had already been put up but did not notice them until later on.

v0038: Date was written as "2008年11日20日（木）" (Thursday, 20th November 2008). The character for 日 in red is supposed to be 月. Looking back at the version before I changed the font to the current one, this problem was already there, but was not so obvious there.

The corrections has been made to the images and respective images would be changed. Initial versions and outlines of these would remain unchanged due to the location they are uploaded to and for the former, it's supposed to display what it might had look like when it first came out and compare the differences (major or minor) with the current version. As outlines are introduced to the drawings blog recently, vectors done before 10 December 2008 would only reflect the version as at that date, and not when it first came out (unless no changes were made to it since then).

Anonymous said…
There are numerous spelling/grammar mistakes in some of your recent posts too (like the one on people joining the queue after you). Maybe you should run through them again and weed them out :D
Sunday, December 28, 2008 at 12:43:00 PM GMT+9

Haruka Takahashi said…
Although I'm too lazy to correct them, I do sometimes mix American and British spelling together or use the spellchecker.

As I use OpenOfice.org instead of Microsoft Office on my main PC, it's impossible to correct grammatical errors. Even if I do use MS Word, they would sometimes point out the errors and not offering on how to correct it other than revising it.