ah, what the heck 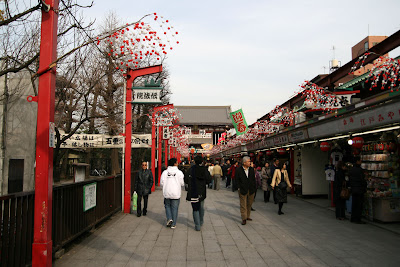 The temple where the famous 提灯 (Chouchin) in Asakusa, Taitou Ward (東京都 台東区 浅草) is. Donation of 100円 is usually done for omikuji (おみくじ) where you draw one of the 100 sticks telling you to draw from one of the 100 drawers near it for the slip that tells you your fortune including great blessing (大吉) to half curse (半凶). When the prediction is bad, fold up the strip of paper and attach it to a pine tree in the temple grounds. A purported reason for this custom is a pun on the word for pine tree (松 matsu) and the verb 'to wait' (待つ matsu), the idea being that the bad luck will wait by the tree rather than attach itself to the bearer. In the event of the fortune being good, the bearer should keep it. More comiket images would appear on another blog.

Side note: I have managed to upload some of the videos form my school in 2006 on MySpaceTV. There are more on youtube, but I plan to move it from there. Also, that Minami-ke: Okawari trailer I uploaded some days earlier has reach large amount of views, but still nowhere near the 涼宮ハルヒの憂鬱 ending I uploaded last year (Jul 2006). 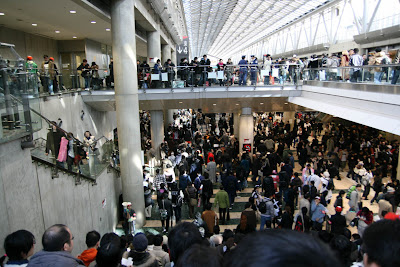 \
Remember the Comiket mentioned earlier? This crowd is only for moving from one hall to another. You should just see the crowd for getting in that started long before the last train before the first day.
big sight event images places of interest tokyo