I dont know why, but someone is copying me. From the way I do things to its contents. I first noticed it when I was randomly viewing friendster profiles of people who viewed me (back then, it was not as large as now) my (then) unsigned drawings appearing on his profiles, along with a username I keep seeing at places like youtube and imageshack. I suspect that person is a guy studying at ITE College West (as at 2007). Now that persorn is currently appear to be inactive (for some reason, but that's good). Of course, since he copied from me, there would be some smilaraties to mine (though not as good). The below are some of the things he copied from me. Note that there are changes and differences since he copied. Mainly either I realied that he (or someone else) copied, or did not like the previous version.

Copied site 1: http://haramoto.blogspot.com/
Original site 1: http://asuna888.blogspot.com/
Notes: The "...の新しい始め" part in the name is copied. The banner at the top (now changed) was edited. Colour scheme, user info was also copied along with anime watch list and links on the right hand side (though not exact). On the copied site, I see awkward spacing, the time and names in english, too many sentences started with "私は/が..." (an obvious sign that the persorn is not a native speaker; normally omitted). The message below the title is also copied. The so called english version leads to a profile on a social website (with copied content, mostly from me).

Copied site 2: http://infinitezala.blogspot.com/
Original site 2: http://fujimiyayuki.blogspot.com/
Notes: Same as no. 1. Note that a banner has been added on mine, along with the change of content (now here, though old posts and friend's blogs links [outdated] are still there) and colour scheme.

Copied site 3: http://profiles.friendster.com/31024514 and http://profiles.friendster.com/31024514
Original site 3: http://profiles.friendster.com/4623690, http://profiles.friendster.com/21470648, http://profiles.friendster.com/32399691 and/or http://profiles.friendster.com/42670116 (basically my first 4 friendster accounts)
Notes: Copied my style. It used to have male gundam seed destiny charaters on it before he copied much of the stuff from me. I don't know why that (ugly) green title header background is still there when the text has changed to red/pink.
The display images are from anime shows or images that I have used previously. (I once adjusted the saturation or added text on top of the image, and the version I edited also appeared on his. The ones with text I added are either not uploaded [due to the position], left alone, or cropped.)
The name order is wrong: it may be correct in the romanised version, but in japanese, the family name comes first followed by given name. Also, he used a half width space ( ) instead of omitting it or using a full width spacing ( ).
I don't know why he used chinese music video for youtube videos.
The anime watch list at the bottom was copied from me: At that time, I was using paint and saved as a gif image with a height of 30px (with some spacing between the text and the edges of the image) when he copied it and resized to 50px (which looks ugly as compared to saving it at 50px). When I change to such that "第12話" (episode twelve) is under 1 image instead of 4 seperate images (due to lenghty html codes; friendster then did not support non ASCII text), he still used the older version. When I switched to Inscape (an opensource vector editor) and saved it as png (along with that navigation menu on my MySpace profiles), he only copied the anime names, but there is a blue-ish background instead of transparent (it happens in IE6 and earlier). Now it appears that he reverted to the earlier version. 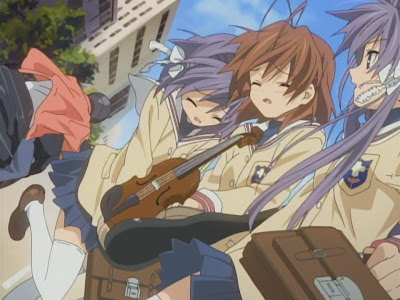 All of the anime has now resume from the December 2007 break, along with the new Winter 2008 noes (not much though, but the Autumn 2007 ones are good enough to keep me entertained). Might blog about anime on the other one later.