Discovered a new route to get home from school

At the bus stop mentioned at Kathib MRT mentioned above, I could also take 39 or 858 in additon to 969.

For svc 39, it goes along TPE, and goes around Pasir Ris before heading towards Tampines where I alight at the same bus stop (blk 303/opp Tampines East CC) as svc 59 towards bishan and walk from there. There is only 1 transfer here, but since it travells through pasir ris and have to walk about 900m along the busy road (Tampines St 31 and Simei Road) to reach home. Not sure how long.

For svc 858, I would travel to Changi Airport and then transfer to svc 24 from there (I noticed it's less crowded, with places to sit, than 969; maybe it's the off-peak period). Over there, i could either alight opp Budget terminal and take the underpass to the other side, or go 2-4 stops further down at the terminals (PTB 3 being first, PTB 1 being second, and PTB 2 being third) with security checks when entering each terminal and transfer there. (I think I would alight at T3 and go to T2 or the bus stop mentioned earlier because of the number of security checks). On svc 24, alight at the bus stop on Upp Changi Road East opposite what was mentioned if I took it from Ang Mo Kio and walk about 600m through landed houses and a park (along Jalan Pelatok). Not sure how long from school, but if I take the bus from opp Kathib and then all the way to PTB 2, past the security checks, transfer from there and walk home from that stop, it would take about 45min.

I didn't mentioned this earlier because I didn't measure the distance. Now that I have, if I were to walk from Simei MRT, I would have to walk for about 760m. From school to/from Bishan MRT, it would be 670m if via the interchange and Junction 8 with high human traffic, or 820m if via the Swimming pool complex with very little human traffic (and peaceful).

Based on the compiled data, here are the results with negative points in rounded bracakets:
(Note: 1 transfer = 2 svcs, 4 transfers = 5 svcs)

Less than 30mins:
About 1 hour:
About 1hr 30min:
About 2hrs or more:
I think i'm spending too much time on this post already, so I'm ending it here. 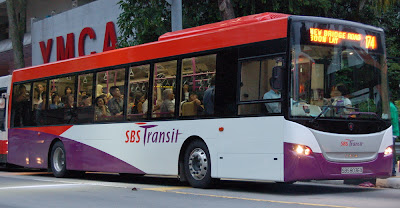 I have been seeing more of this bus lately, with most of them from the interchanges in the Central District and passing through Orchard Road.