February 15, 2008
[Note: This post contains . If your browser does not support it, it would appear to the right of the text instead of at the top]
(All the images you see in this post are scaned using the same scanner)

As I said earlier in this post, I was playing around with the fax and notice that the film (ink) is close to finishing. As I was rewinding (like a cassette tape) it to reuse, i saw that the date before I got it was around with the earliest around mid-2002. It seemed to be from some guy in (phone number started with +852) with records of membership of along with names of hotels or restaurant with names . The scans below are the copies form the drawings that I found before I "rewind" the "film", so, except for 1, you won't see the previous text on the images but you will see a printing problem on the right-hand side. I haven't put the original some of these fax-copied you see here online yet though. 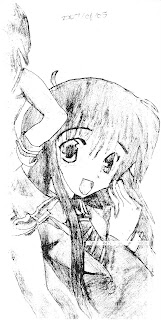 As you see on the left here (click on it to enlarge), the left side (it was upside down) got cut-off for some reason. Also, it's not clear. If you pay close attention to it, you can actually see text from the section of the film that was previously used to do so.

Okay, here, the image you see above and on the right are the same (click on the respective image to enlarge). Obviously the one above is clearer since it is scanned directly from the original unlike the right which via a photocopy-like device, where noticeable loss of quality is there. The printing problem is not so obvious here though. [the blog and email address you see on the drawing itself is indeed mine.]

I will put up the clean version of the left drawing and another which I didn't put up sometime later. It will appear at photobucket and friendster profile when I'm done. 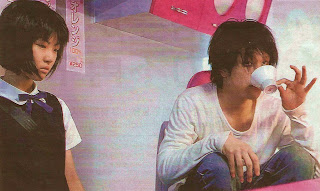 The movie based on 's view is coming out quite soon.