March 21, 2008
Besides updating online content, I should be cleaning the stuff around the house during the holidays. I have stuff chucked to one corner and somehow forgot about it and have dust gathering on it. I also have worksheets accumulated since primary/elementary school but the ones from secondary/middle/high school are in a mess with probably useless junk stuffed in-between.

The one I did in November 2006 was basically handling the obvious ones (as you can see from the pictures in that post) and maximize the space given by creatively using that space and arrange them neatly. I manage to finish it the following month, barely resembling from the image you saw. Since then, I have bought several books and magazines (like Newtype), but they wern't enough to fill in the spaces. I have also bought some boxes from IKEA to accommodate more things like PC parts (PCI cards, mainboard, power, USB cables, CD drives, speakers). On top of that, stuff have accumulated and now looks messy.

Right now there are several CD/DVD spindles on my study desk as it is just 90 degrees from the PC. Underneath it is a 2007 calender that hasn't change since July (it's now March 2008) and used printer cartages. The bin is overflowing as it's been ages since I last change it. (I don't trow food or drinks in that bin, so there's no smell or pests.) 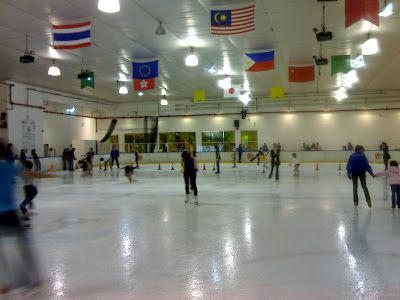 How am I supposed to ice skate when it's this crowded with experienced people whizzing past me?