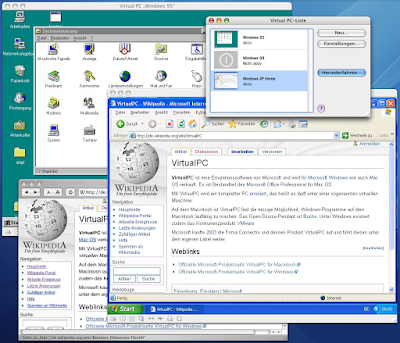 (Read this if you don't know what a virtual machine is)

I found out earlier today (evening of the 25th) that Microsoft have released Microsoft Virtual PC 2007 for free on both Windows and Mac (PowerPC only) based PCs. I tried to install it despite Windows Vista Home Basic not listed there (though the Ultimate and Business editions are) and it works well. The amount taken up by the virtual drives is the same as the used memory space, not the total allocated (virtual) hard disk space.

Anyways, first, I installed Windows ME for the fun of it as I already know it's no longer supported since 2006. Everything went well, including the LAN, reading the CD, music and stuff. The only problem is stuff that would have been fixed in later versions. You can switch between the guest and host PCs by pressing the Right Alt and the Return/Enter key at the same time. Anyways, there were only 30 or so critical updates after you had install IE6 (and something I can't remember) as they had to be installed first before you could install anything else.

For windows xp, I only had a SP1 version CD. So right after installing it (and dealing with the annoying activation thing), I pop in the SP2 update CD and let it do the rest. After that, to my horror, there are an additional 91 critical updates to install. I wonder if the activation thing will appear again after installing SP3 which would be out next month...

Of course, I actually want to install Microsoft office 2003 on those as my school assignments uses it a lot since the one that came with my PC (Vista) have the 2007 version, but it's trial based. I have about 20 more tries before I have to enter the serial number (which has to be purchaced) to continue after that. In case I (or someone else using it) absent-mindely opens an office document, I have installed the OpenOfice.org program suite. However, the noticeable incompatibility is opening PowerPoint (MO) in Impress (OO). The font effects and slide animation either do not work or appear differently.

I have yet to install Linux or MS-DOS yet. But due to the absence of a floppy disk drive, I probably won't be able to install the latter, although I might be able to via Windows 95/98 as they come with MS-DOS 6.

For Ubuntu Linux (ver 7.04), it took an incredibly long time to load, which also affected the host PC performance, before I received a fuzzy error message saying something about the GNOME interface failing to load and attempting to load again (which never happened).