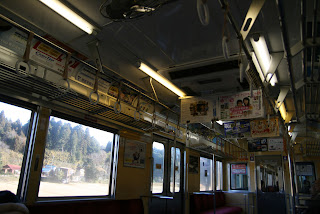 Just as I was about to leave, Shin'ichi wanted to tag along with me. Well, since he's about to enter middle school next year and the most mature among my siblings, I don't see why not.

Along the way, we walked past an ad for enrollment into a university and academy specializing in certain fields: the school our cousin went to was one of them. The sight of those ads made him think about which middle school he should go to.

Me: "If you're thinking about entering the academy Aiko went into, you should keep in mind that many people are applying for it and admission is based on the grades you scored for the entrance tests and the amount of places avalable. So in order to guarantee being able to get in, you need to score around full marks."

Shin'ichi: "Kotomi----oneechan, why is it that you did not enter that school and chose a normal high school instead when you obviously can score high?"

This brother seem to always add an odd silence between my name and the suffix or even omit addressing me completely and jump straight to what he want to say. Well, I myself omit addressing them, but I am the eldest child (not that I want to be) in the family.

Me: "You see, I don't really like large places and the people there are the rich type who look down on poor people. On top of that, the school fees are quite high. The uniform of my current school was paid for by our Uncle Kenji since mom and dad are already struggling to support all of us."

Shin'ichi: "Oh, does that mean that uncle will help us?"

Me: "Well, only financially for necessities, but you never know. He may help you to pay the fees, but not help you to admit into places unless you could proof to him that you can. I got to work with him because he knows I like science-related stuff and score well in school. You could go to my middle school: I'm sure the staff there would know you as my brother from our family name."

He was staring at me as though there was something.

Shin'ichi: "You know, I never understood why dad keeps avoiding looking at you, Kousei or Kuniko. Do you know why?"

Me: "I don't know why myself, so I don't know the answer to that any more than you do. You could ask him, but he might change the subject if you do try to ask."

Shin'ichi: "Also, your face has that 'I have a boyfriend and want to be with him' written all over."

Shin'ichi: "Oh ho ho! So it's true! I noticed that since golden week, and more obviously, the days leading to your birthday. You were behaving differently. On top of that, I saw you sitting quite close to a guy at your birthday party at home the other day. Wanted to tell you this earlier, but mom is always around."

Me: "Okay, but don't tell anyone else about it, not even our younger siblings, until me or him say so. Promise?" 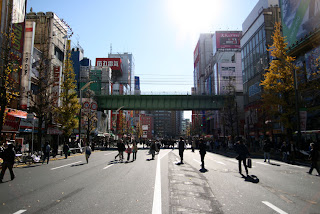 After a long trip, I finally reached a particular area in the capital I wanted to check out on, like music players, cameras and other interesting things with my salary. Not only is this place known for electronic goods, but also products relating to animation that is, for some reason, aired mostly quite late at night. We had to have a look around for cheaper prices, but also watch out if they are 2nd-hand or fakes. Good thing they close the road around the station: the place is too crowded!

Looking around, I decided to get a new notebook computer as the one in my bedroom is too old, slow, and can't run the current applications. I might also need it to write my own programs or do work. As for the old one, I'll put it aside: it's been gathering dust since I last use it during the holiday before I started working anyway. I can't even use the internet with the old one and since been using computers outside home a lot. At least it has a connection interface that is backward compatible with the memory devices I use a lot so I can get data out of it. As for the internet part, there isn't any at home, but I might be able to use the cellular network or one of my neighbor's wireless access point.

Is there anything else here? Well, since I came all the way here and dragged my brother along (or rather, he wanted to tag along) here, might as well explore the place. Where I am is not a good place to start for him though, at least, until he gets older.

I'm feeling rather hungry now, but something tells me to avoid those cafes that are scattered in this area and head elsewhere. After that, I'll let my brother go wherever he wants to go, except back here. I don't have anywhere in particular that I wanted to go now.

(to be continued in Part 14)
3rd Story story