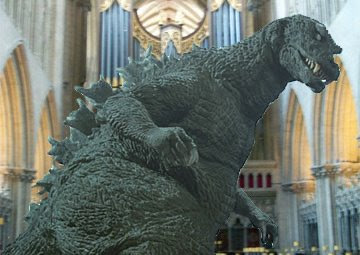 "As you enter the church, a godzilla appears in front of you."

There was an event at Woodlands Drive 50 at an open field not far from the interchange where I failed to take any photos and sweat in the (indirect) sunlight. Reached at the site at 8:30am and I already say a crowd, mostly children. Ate a bit. At around 9am, had to prevent the crowd from entering the food area until around 10:15am. During that hour many people came and we had to stop them from entering with many people asking me in (mandrin) chinese, which I don't understand.

Anyways, after the crowd control, I help out with the food. It consists of some thin orange strings, some small square green things, some light brown spongy things, eggs, and some brown liquid added. They call it "Mee..." erm... I forgot the name. I just dump most of the ingredients into a cup and let everyone else do the rest for the next 2 hours.