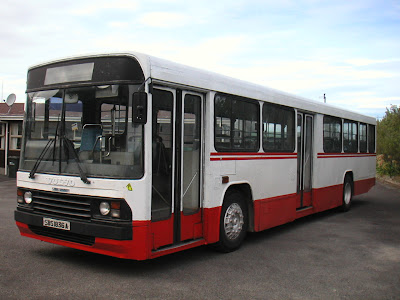 You don't see these buses anymore as at end-March 2008. It has been around since 1988. This picture was found on a New Zealand website dealing with vehicles. 2 other bus models with bodywork somewhat identical to the above are being phased-out with 1/3 of a particular model already done with the last ones in 2010.
I have finally figured out on why the width of this blog is so annoyingly narrow if you were to view it at 1024x768 or wider. While I was playing around with the images, figuring out the best position of images, I saw a "page structure" section and saw a maximum width as around 800px (min is 500px). I increased that to 1280px and can already see the difference. Due to the new maximum width and the fact that some of my post titles goes beyond 1 line, I have created a new one that can support 3 lines (at the current font size, which is big).
I was supposed to put this up on Monday afternoon, but I had a lot of work to catch up with and stuff I had to do that is mentally changeling. Anyways, here it goes:
It was only on that day (Monday) that I found out that Farharn (wait, I just realized that I know several other people with that name!) G would be leaving school for another. He (said that he) was posted at an arts school in the city in multimedia. I wonder if this has anything to do with the "O"-level retake last year... does seem likely.
What make it even sadder is that I am closer with him than the remanding classmates from last year and there was hardly of a farewell other than several "bye"s and "hope you do well in your studies/life". Chances of seeing him again? Very slim, slimmer as the years go by as judging from past experience, I come across about >5 of my secondary or primary school schoolmates a year. In any case, I'm going to miss him, his emo style, and just about anything.
As I might have mention on an unrelated post, I am not good at remembering names. If a person whom I have never met before introduces themselves, chances are that I don't remember your name for the next few weeks/months. When calling out people, you might have noticed that I rarely say out the person's name or always only for a particular person. The truth behind it is that I don't remember the other person's names at that point in time.
The degree of formality and (spoken) language would affect how I would address that person. I would address appropriately like Mr/Ms/Miss/Dr/Prof. Ehbee Sidhi. (If in Japanese, it would be the level of relation. For example, the above name would become "しでぃ（えび）" followed by "さま・さん・くん・ちゃん". Do note that given names, like the one in brackets earlier, are only allowed to be used if the speaker is close/allowed to the other party） [YAY! LET'S CELEBRATE! YAY! WOOT! ^O^] {I ment the opposition, erm... nevermind...}
Because of this system of addressing people, hearing only the given name, surname, or nickname, I may not know or remember the actual full name even though I have known that person (by what I know) for a long time.
Prices of oil and rice have shot through the roof in recent months. I just found out that Moribayashi (森林) is also read as Sim Lim. Temperatures have been soaring like crazy. I wonder if the early sunrise / red sky in the morning I see lately says anything about the weather...