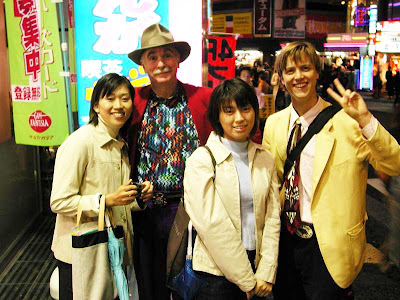 Q: Who in this picture is me?
A: None of them.
The media box at the bottom of my Friendster profile's HTML would also be copied onto this blog as a backup should something go wrong. This has happened before as some malicious software would cause it to be modified after viewing an infected profile. Fortunately, I had offline backup done each time I make changes to it (at that time). Seeing that I would access from another PC, puting it online would be more pratical. I could use removable storage devices or online storage such as gmail (Google Mail in European countries), but it's troublesome to find it, wait for it to load, may be infected by viruses/spyware, and prone to file corruption or drive failure.

By putting it up here, they (Blogger) may also point out to errors in the HTML such as a missing forward slash (/) at the end of tags such as "br" (at the beginning of the end tag if it has a start tag).

Major changes made to the media box include:
Future/regular updates include:
If you were wondering what my shoutout (as at 17 april 2008) says, it says that I would stop updating the other profiles (no. 1,2,4,5) as it's affecting my time that could be used for studies and receive too many comments with large images and messages that contain mostly forwarded (and crap) messages. I had spent too much time just adding them, remove inactive ones, and removing forwarded messages without opening them. Just doing part of it already takes up the whole day and I had to do it again not long afterwards. I have also changed the Featured Friends to reflect this.

PS. I signed up for a photography and library club earlier today.