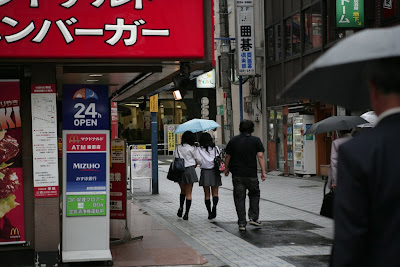 Yes, that is a 24hr McDonalds on the left
It seems that there is a problem with the portable hard disk (Samsung 2.5" 80GB). I bought it back in September 2005. The casing is falling apart due to the plastic parts of the casing snapping off and screws securing it gone missing. It's been like that barely months after buying it. Because of the falling casing, I rarely unplug it from the main PC, let alone bring it around to places like school. Sometimes, when I notice an unusually long for transferring with the bar not moving and the time it would take to transfer increasing like crazy or remain the same after a long time. That also cause the explorer to not respond when I tried to cancel it and have to hard reboot the PC. I first notice the most serious case when I tried to burn a DVD iso when it failed when it barely started. It said something about the rostrum (or something like that) timeout. When I eject the disc after a cold reboot [tried a normal one, but nothing seemed to happen (during the shutdown screen, I notice a "shutdown and install updates" option) after a while], I noticed that the disc appears to have been burned more than halfway. When I startup again, I manage to transfer a CD iso (created after the DVD one) image onto the desktop. I turn on ImgBurn's test mode to prevent further wastage. This time, it said something about "insufficient power collaboration". I continued ahead anyways when 3/4 of the way, the same thing happened.

What should I do with the contents? It's about 35GB large (individual file sizes ranges from 350 bytes to 3GB). I could transfer to another PC, but I wouldn't have space for everything else (like the newest anime episodes from Japan and the virtual hard disk files). I have a lot of images like the ones you see on most of my posts and songs that are now hard to get as they are released quite some time ago. I have already transfer some, but still have a lot to go. I only have ~50 700MB CDs and 100 single layer DVD+R discs. With the amount I have, I would need 1-2 single or dual layer Blu-ray disc. Speaking of backing up contents, I wonder when my main PC would break down. It's made in 2002. I have one made in 1997, but that is used only for office use at that time. Now it's hardly used due to small memory space (compare a 8GB HDD with a 1TB one, capacity of today's flash memory sticks (512MB-8GB) and DVD discs).
I haven't tried burning again since installing the updates mentioned above.

The "Main teacher" (or homeroom/form teacher, class adviser, whatever you want to call them) for the last (school) year told my chairman/class representative (again, whatever) that he is posted to the IQS class somewhere on the 4th floor. As he would be taking the same subject as me, another classmate assumes that I would be in the same class. I should go check on the 1st day back just to make sure. Who knows that I may be posted to IQR or IQT instead. I saw a reasonably large amount of classmates quitting school (to join another or start working) for last year. Some of the remaining ones would be taking different subjects than me.

P.S. I think the new underpass (which is actually the esplanade circle line station due to operate from 2010 onwards) between citylink mall and suntec city has been open since 8 Apr. The temporary linkway bridge has been there for far too long! Maybe since 2003!