December 24, 2007
I don't know why but that "thing" (I can't say it here) above "random image (from anywhere)" is in japanese sometimes. Another thing is that the banner of the same dimentions on my other blog has images instead of static text.

Went to the airport in changi after fetching my sister from bishan (it was raining with lightning and sunlight) to eat. Parked at Terminal 2 (T1 carpark was not sheltered and was raining heavily) but to get to the "staff canteen" at terminal 1, had to walk across to the other side to get to the Skytrain that goes to T1 (midway, mother complained on it being too far). Got there, was amazed on how much it changed since I/we last went there. On the way back, father commented on how near it is to our house (barely 10mins by car/taxi) as compared to people who lived in Jurong.

Have yet to do the BC project yet. Speaking of which, one was featuring some facial care products and was quite long and boring (mabye its the topic itself). Planning to cover japanese stuff, but not sure what exactly. Thinking of doing places of attractions. When presenting (most likely the 9Jan), would use my laptop and use the remote function via bluetooth on my sonyerricson phone.

On the 22 Dec, I overslept as I remembered that there was a class outing at east cost park at 9:30am. Took 12 from outside my house, transfered to 196 at Bedok South Ave 1 and alighted at Blk 56 at Marine Parade and walked to the park from there, through the neighbourhod shops. Arrived at the MacD there at 9:50am. No one I know was inside. Went to look around, but had no idea which pit it was. Turned left (facing the seashore) until the 2nd bicycle rental shop before turning to the opposite dir. Walk until the underpass near Parkway Parade. Took 36 from there (missed 966 by a bit) and alighted at Suntec City. Walked to City Hall MRT from there (Esplanade stn was nearer, but under construction). Did not drink or went to the toilet since I left the house (i'm not used to buying from places that has a casher). Outside Simei MRT, the vending machine broke. Went to blk 149 (where I stayed from 1989 until 1996) for another vending machine. Bought $1 worth of snack and an isotonic drink there. Went home which was just across the street.

Just started watchnig Kanon (2006) and wanted to see how good it is, since it's created by the same company (京都アニメーション) that produced 涼宮ハルヒの憂鬱 (2006) and クラナド (2007).
Current anime (debuted in Spring/Autumn 2007) in japan has the next episode aired on the 2nd/3rd week of next month. Some of which is near/at the final episode. Most of the new winter 2008 anime (not much) would begin on the 1st week. (I wonder which of the current ones will air before the 2nd week of next month (24 Dec - 5 Jan), )

Was hearing strange sounds from the road (which is right outside) as I typed this. I wonder if it's those CNG/BioDesel powered vehicles...

Cristmas is not long now... 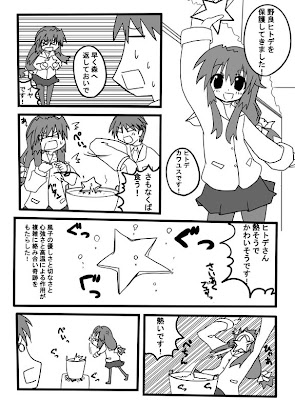 Fuuko: It's done!
Tomoya: That's a star (星)...
Fuuko: No, it's a starfish (ヒトデ).
(stuff happened)
Fuuko: It's hot! (dumps the thing back into the boiling water)
anime money random travel