I spent most of the day adding missing/corrupted information, making sure that compilations in an album appear together instead of seperately, and adding album images.
At first, I was clueless at to why mp3 info looks okay on this pc but when I transfer to another pc/device, the info (that is not in latin charaters) appears messed up (mojibake). I noticed that when I added/edited info using Windows Media Player or Apple iTunes (above), the text becomes okay, though the ones I edited earlier in windows explorer are still messed up. The problem now is that the music I "received" from chinese sites are messed up. I can solve it by copying the file/folder name or open the readme.txt included in it using firefox by changing the encoding. It's time consuming though.
As for the album art, I was clueless as to how to add image until today. 1st, I have to move the folder of the songs away from where you originally save to (otherwise, the text info can be edited). Then make sure that the correct names of the songs are there (and select "yes" for "part of a combilation" if there are more than 1 artist singing different songs in the same album). Then, select all the songs of that album, select "get info" (1st option) and then click&drag the image to that box on the right that appears in itunes (you might want to crop the image if it's not square or other parts (like back cover) are included). Now the image would appear when you play the song (if supported).
I haven't tried the "Convert ID3 tags" yet. Not sure what it does. Might try on files that I have backup of or info that can be easily be found. 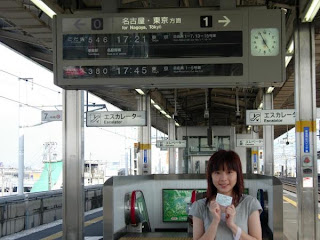 One of my former school classmates. Photo taken about 1-2 years ago. Haven't seen her in a while. Wonder how she's doing...
journal music player