December 20, 2007
[I tried to record the 1280x768 version of the 1st 5 episodes of the 1st season of 涼宮ハルヒの憂鬱 (The Depression of Haruhi Suzumiya) in cronological order on my VCR. It worked, but the playback on the tape make it look old (with mono sound) as compared to the original HD version. Also, possibly due to age, the tape player did not indicate the position. Also, even though the counter reach around 2h 15min (since I fully rewinded and started recording) on a E-195 tape, I tried recording the 6th episode but mid-way it behaved as though it already reach the end. Also, when rewinding, the VCR turned off by it self.]
There is a class outing for IQ0704F of ITE college central bishan at East Coast Park this Saturday, 22 Dec at 9:30am (i think). The meeting place is at the MacDonalds there. The direct bus to there is 401 from Bedok interchange, but that bus operates on Sat, Sun & Public Holiday. On saturdays, it operates from 2pm-10pm with intervals ranging from 20-29 mins and 10am-8pm on Sun/PH.
As the meeting time is before the 1st bus, alternative routes have to be taken. It is possible to walk to there from Blk 56 in Marine Parade. If from bedok interchange, take svc31 or 196. (If from Simei, Tampines or Paris Ris, take 12 or 38 and alight at a condo somewhere around Bedok South St 1, near Masushita (Panasonic) factory and take the buses mentioned earlier from there.)
I don't plan on bringing anything to there and I never been to East Coast Park before other than travelling there with my parents by car (which itself was ages ago). If I never set my alarm, I would always wake up at 7:45am, regardless of how late I slept. To tell you the truth, i'm kind of unwilling to go and may not stay there for long (unless cycling is involved).
Come to think of it, it's already close to the end of the year and cristmas is less than a week away (I don't celebrate that, nor do I celebrate Hari Raya Haji, which is today). Lately, all the festive periods don't seem to make a difference to me, just like any other day. Mabye, it's because of the same old boring places everytime. Also, due to high school fees of my sister, who is studying Fine Arts at Lasalle (she already received a Diploma in something to do with computer programming at Temasek Poly in mid-2006), travelling to countries other than Malaysia is not likely to be until 2011. Possible places to go with my family include Bankok, Melbourne Beijing and Taipei, though I also want to go to Hongkong, Seoul, Hoykkaido, London, Paris, Berlin, New York, and Vancoover.
P,S. Hey, it's the end of the year already??? The days seem to pass by so quickly... It's like the opening ceremony of the 2004 olympics in athens was recent. 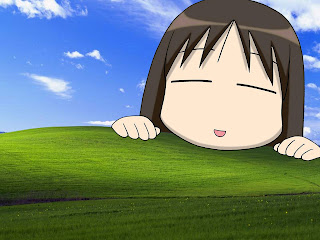 Azumanga Daioh is comming to Arts Central every Thrusday from 30Dec, though I have already watched the entire series a few years ago. D-Grey Man doesn't interest me.
anime event notice outing