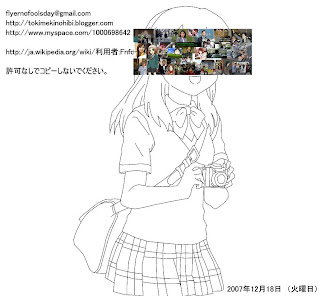 [Yukari Takahashi (who also helped me with my japanese language blog) would kill me if I put up the full size version in colour here because she already has a reputation / large fan base somewhere. She said it's fine if I use one of my images on top of the one you see here. Don't ask how I get to know her.]

I'm quite blur when it comes to vector drawing. At first, I don't even know how to create it. Now, using inkscape, it looks alright, at least, for 2d people and basic things like a box. I'm still unclear on how to do something as complicated as a city scenery.
I have done at least a few and uploaded some of them online. It's been a long while since I have done vector tracing since I have use the pencil (erm...) to do the same thing, but in monocrome. To find the earlier vector art, you have to dig deep since it was a long time ago. You can try looking through my 1st blog (that blog used to have the same url as this blog until around April 2007) or imageshack gallery for it. If I remember correctly, there was akihabara (didn't turn out quite good), the main charater of "higurashi no naku koroni" (with one of the objects removed), and a school rumble wallpaper (never completed). There are more, but I forgot.
As for that pencil drawings/tracings, I have added several more after this drawing. Also, there are some drawings that I did not upload at all or had changes, but didn't update it.
If I'm not wrong, Takahashi-san is going to put up the large version in colour "by the end of the year" (in less than 2 weeks) on one of the blogs she has access to (she had not done anything other than changing the layout of the tokimekihibi blog for quite a while). She said it's from an anime that was aired 1-2 days ago.
Edit (19 Dec, 10:12am): It seems that she has put up the original size image here and the thumbnailed version at the linked blog mentioned above. 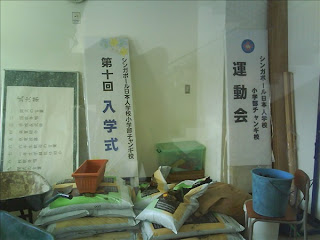 I think I have uploaded this image about 3-5 times... Wanted to post a different one, but it's not on the pc i'm typing this post from.
drawing updates