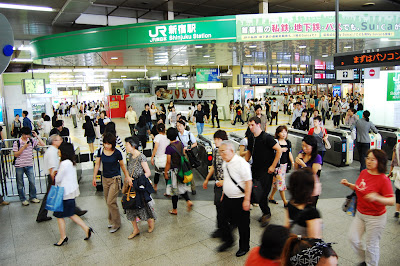 Shinjuku Station (新宿駅) is one of the busiest station located somewhere near the Shibuya area. So busy that it recorded an average of about 3.31 million per day last year (2006).

Since it serves that many people, of course, there are about 25 train platforms served by 5 different operators along with about 200 exits. It's so large that you can compare it with a small city.

Of course, like any other station there is an automatic fare gates (except in towns and villages which may not have any). The card used to enter is called Suica (based on Sony's Felica, which is also used on the Octopus Card in Hong Kong and some card in Singapore with an uncreative name). It can also be embedded in mobile phones (Keitai denwa / 携帯電話). That's why there you can see people putting wallets, handbags and keitai on the card reader to enter. Of course, there are machines to purchase tickets. 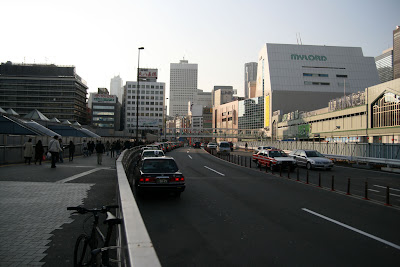 (Near the New South Entrance/Exit (新南口). The train station is that short long building on the right of the image.)

The sun sets at around 4pm (UTC+9) as compared to Singapore which is around 6pm (UTC+8) and is quite fast. The reason for that is that Singapore follows the UTC+8 timezone even though its geographically located on the UTC+7 timezone for "economical, political and social reasons". Also, countries near or at the equator experience the shortest sunrise/sunset. 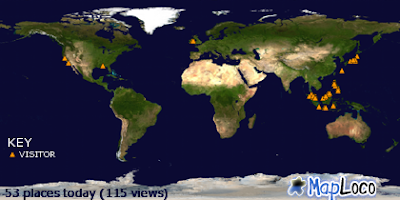 (Note: This is not the live version that upades regularly.)
I was looking at my Friendster profile to look at this (which can also be found on myspace) and there were this many people, with the majority being in Asia Pacific. Places include Boynton Beach (Florida, United States), Oslo (Norway) and Surigao (Philippines). Some places state only the country (eg. ", Japan"). I also see names of villages in Malaysia on that list too.
images japan shinjuku tokyo train