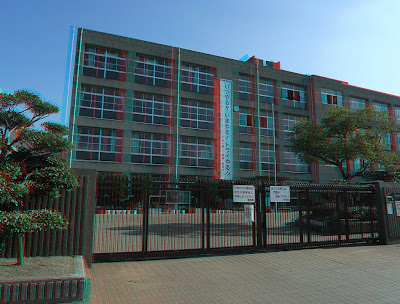 Above image is best viewed when wearing those "3D-glasses"
The exams are over! Now I can take a breather with all the crap pushed to me aside, for now. I have to admit, school is fun, but the lessons are getting harder and harder for me to understand that it seems that I'm getting further and further away from catching up. So, unless I'm really interested in the subject, I don't normally study for a subject, even if the exam is just the following day. :P

So anyways, I have translated the text of a chapter of To Love-Ru (とらぶる) not long ago due to the boredom I had when typing in the original language. It wasn't easy trying to translate as I had no references to the earlier chapters except for the anime (which at the time of this post, at episode 8). I know that there are errors in the translated version, but translating from a language from one to another that has a completely different sentence structure and writing system, inaccuracies can happen. Speaking of the manga of it, something major happened to the main character, which in some ways is like how Ru'n became Ren and vice versa, but somewhat different. It's kinda early to say what will happen next though.

For my manga collection, I think I should stop buying the "ハヤテのごとく！" and buy the one mentioned in the previous paragrapth instead. I bought it because the first few episodes (Spring 2007) seemed promising. But around episode 10 onwards, it seemed to go downhill from there. I wonder how I managed to watch through all the episodes... Must be like how I watch from season 1 (around 1997) to season 8 (around 2006; just before I started watching other anime like "The Melancholy of Haruhi Suzumiya"). I should be careful when reading it with my parents and friends around and on public transport (subway trains and/or near children especially) when reading certain pages.

Speaking of Pocket Monsters (Pokemon), except for seasons 1 & 2 and other major episodes, it seems that they are taking an incredibly long time to get from point A to point B with every other episode being the same old stuff over and over again. Now, the mention of it and any other over rated anime (like "BLEACH", "D. Grey-man", "One Piece", "Naruto") that also seem to go on forever make me disgust, but let's just put it all behind. What happens in the past should remain there.

As I was typing this post, I saw an airplane taking off over an almost-half moon in the sky. Due to the "light pollution" around where I live, I can't see the clouds or stars. Oh wait, I think I saw another plane taking off. I wonder where is it headed to. It appears to be flying southwards.