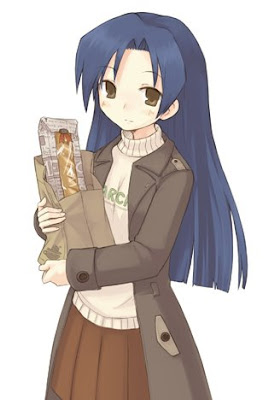 This post was originally supposed to appear here, but realized that I was typing for the wrong blog when I was more than halfway through typing this. But since it's concerning about this blog, I would just leave it here anyways. Text that are in italics here are not part of the original post.

I have replaced the regular link list with a drop-down menu with a "Go" button next to it due to an already long list of links (mostly other people's blogs) and possibly add more. This would save a lot of space as the sidebar alone is so long that you can fit 12 (twelve) of my longer-than-average posts in it. Kind of a waste of space actually, especially when you are viewing only 1 (one) post.

I have moved "RSS feeds of the sites I go to", "My Profile" and "IMEEM music player" to the side where the posts normally appear, so less space is used since they are text and uses less vertical (top to bottom) space if there is sufficient horizontal (left to right) space. The height of the music player mentioned above and the "Tagbox" are reduced and the width.

For some of the elements of my content, I have switch to percentage (%) based width, so how big a thing will appear in your browser depends on your browser window. You would notice the size changing if you were to adjust it with the % based element in the window.

The YouTube videos of my friendster media box (an exact copy of it's HTML can be found on my main blog as a widget, though might appear different) are now percentage based so that I can put the exact number in a row and not bother with the pixel-based measurements. The last I looked, it looked fine, except that on my main blog, there is an unusually large empty space in between videos after every 2 videos. Also, adjusting its height using the percentage-based measurements doesn't make any difference.

Seeing that I can't think of a nice title, I just used a French (to make it cool) translation of "Through the eyes of someone" and "Hoping for a better future". The area where the title appears on the blog itself is replaced with an image. Besides the current one, I have yet to come up with another one. Not sure which, but it should be no wider than 1000px and the thing between the IMEEM player and the posts (Due to the rules and regulations, I can't say what it is exactly) should be visible, with an aspect ratio of around 16:9 or wider. Images might need to be resized and/or cropped to meet this requirement.

Speaking of images, with that new hard disk I bought a few days ago, I would transfer all my drawings, photos taken between 2003 and 2007, all of my anime images (except those in "My Documents" as some are duplicates or the exact source forgotten) to it in an organized manner (like when you insert a memory card into a SonyEricson phone or a PSP) instead of all over the place. Not sure if everything else like songs and videos apply too.

I still haven't seen the other portable hard disk since I lent it to my sister a few weeks ago. I wonder what is keeping her so long as it has been days since it happened. Last I herd, she wanted to use it to transfer 1000 (one thousand) images from her school PC. (I had 45000 (forty-five thousand) of anime images on it) and a lot of other stuff that take up about 1/2 to 3/4 of the total capacity of 72GB, more if you count those I had deleted or had transfered to CDs/DVDs.) One of the reasons why I bought a new one. As smillar incidents have happened in the past (with one which caused its casing to brake) I have transfered all of my files onto the laptop. However, that is running out of space too.