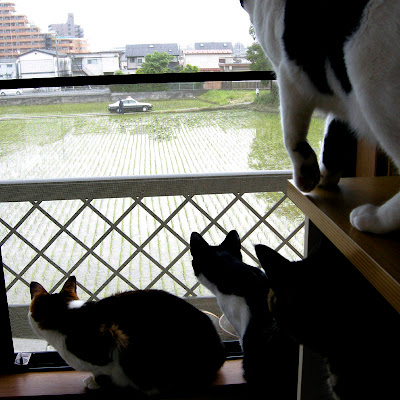 LOL! (^o^)丿 My other blog looks as though it's actually hosted at Wordpress, and this blog at a japanese blogging site but it's not! Anyways, you might have notice a search box that is fixed and floating at the bottom right. That feature came with the layout. For your info, I wont bother checking if my blogs look right in IE7 or earlier as those browsers are outdated and/or is well known for not following web standards since it overtook Netscape ages ago.

Anyways, don't be surprised if you see posts earlier than May 2007 (especially 2001 and earlier), which is when this blog was created. These came from older posts from other blogs that are currently inactive and stuff that had been sitting in my mind for quite some time. (I was born on August 1989 by the way)

Lately, the anime I have been watching has been reduce to just 4 out of the so many listed here. and the >14 episode series from the Spring season. 2 from Spring season (Code Geass R2: Leouch of the Rebellion, To Love-RU (とらぶる)) and 2 from the current Summer season (Secret in Nogizaka Haruka, Birdy the Mighty Decode). Reason being that the other ones bore me along the way (Strike Witches, Thing Precious to a Magician: Sora's Summer) or never even watch it in the first place (sadly, great series like the Gundam series and Marcross Frontier falls in this category)

Anyways, after school, I went to survey a place around the above picture (早稲田渋谷シンガポール校) for an event on 21 September. It was only 5-6 bus stops away from the nearest train station, but I took the wrong one and ended up at a station 4 stops further down, after about 30 bus stops through unfamillar (but nice) areas, wasting time that could have been saved if I had taken the direct one. I'm not familiar with this part of the country as I'm more familiar with the downtown area and the area around the airport (where I live). I also don't a guide with me. Google Maps on my phone does not help me to get around...

By the way, a lot of the things in this country is like crap (though I have seen worse) compared to the places of the photos I always put up in my posts.