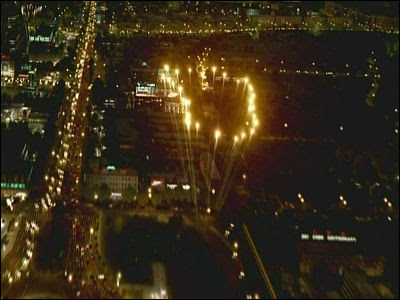 As promised, I managed to catch the entire closing ceremony of the 2008 Summer Olympics in Beijing.

First, there was an award ceremony of the 40KM (or so) men's marathon held earlier in the morning through the streets of Beijing. (Speaking of which, I notice that the gap during the race between each participant got larger around 20KM or an hour into the competition.), followed by the national anthem of the nation of the gold medalist (Kenya). Then there were great (but forgetful) performances by the Chinese.
After that, the President of (People's Republic of) China made a speech, followed by the the IOC president. I have no idea what the Chinese president was saying or if the French part of the IOC president speech was different. Anyways, the English section talked about how successful the event was.
Some time later, the athletes that took part (well, not all) came came streaming in. Then, they raise the flag of (People's Republic of) China. The IOC flag was already up. Then, they raise the flag of Grease and the United Kingdom. All had the anthems played as they are raised (lowering in the case of the IOC flag).
The (other) olympic flag was passed from someone to the mayor of Beijing, the IOC president, and then to the mayor of London, waving the flag for a bit as they passed from one another. I noticed that they had trouble waving the flag. The next summer olympics will be held in London in 2012. Even closer is the Winter olympics and the Youth olympics will be held in Vancouver and Singapore respectively, both in 2010. 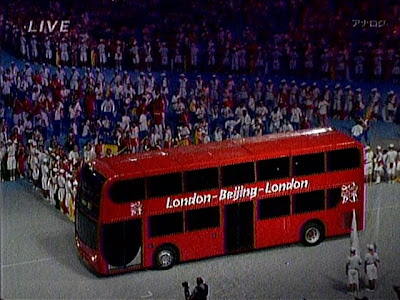 Anyways, after passing the flag around, a video was shown an animation previewing the London 2012 olympics, featuring a red double-decker bus. That double decker bus (complete with a UK registration number; pictured on the right) later made an appearance in the (Beijing) National Stadium, complete with a London bus stop sign and London people queuing and waiting for it.
I noticed that there was something perticular about the doors and windows as the windows were very dark. Anyways, as the bus reaches the stop, people started dancing and suddenly, the upper deck of the bus opens up to reveal some kind of mini-garden of the buildings surrounding River Thames in London. Then, a platform raised from the inside with a child and some famous football player appeared. I forgot what happens next, but there were more performances by the Chinese after the flame was "extinguished". The end of the ceremony was marked by more fireworks and the announcer there saying so. 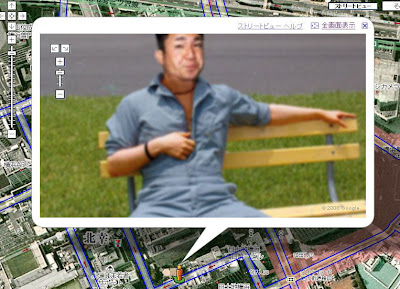 Anyways, I was looking through the street view option in Google Maps in Kitasachi (北幸) in Tokyo (東京) when I noticed something particular near a 7-Eleven there like what you see in the image. That picture is something that (at least, the guy's face) is quite common at 2-chan for some reason. If you were to type "日本神奈川県横浜市西区北幸" (Kitasawai, Yokohama City, West Kanagawa Prefecture, Japan) or just the last 2 characters of it, click on an area a bit to the south east of Point A of the above search result (as in the picture) and you would come across a black background and a message that it's no longer available. I don't know how, who, when or why this image was put up, but sure had a good laugh that it even happened.