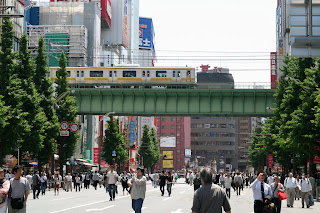 Being surrounded by languages that you know little or nothing about can be frustrating. Ask anyone on the street and most likely they would not understand (or are too shy) to understand what you are saying.

Even if you know at least some of it, your head can get fried (i.e. dizzy) when trying to read a language that you are not used to (i.e. not yet at a near-native level) for a prolonged period of time.

If for example the language that is spoken is the same as the caption/subtitles, it doesn't really help you understand what it means, but it does help on how the text is read (eg. "Rendezvous" ["promise/(gathering) place to meet"/"meeting"] would be pronounced as "ren-da-vu" or 発売中 ["on sale now"] as "hatsubai-chuu"). Even difficult if the writing system is in a writing system you are not familiar with (eg. Arabic) or look very much with what you are famillar with but it's not (eg. Russian).

You probably won't even know or come across this, but "ſ" is the lower-case version of "S" and "ß" (looks like β(beta) ) is transliterated as "ss". The Cyrillic "С" (Es) is one of the few Cyrillic (writing system for languages like Russian) characters.

Since on some fonts it's indistinguishable from look-alike Latin characters, be careful when you received a link. Make sure when sending payment online, you are sending payment via Paypal (in latin) and not Раураl (in Cyrllic; the "l" is in latin).

If in doubt, try typing it again or change the encoding to ASCII/Western (ISO-8859-1) and doesn't mess up after changing.