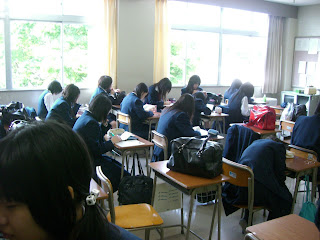 We would normally eat a lunch box at lunch, but since none of them brought their own, we ended up buying there, which can get sold out quite quickly, on top of long queues. Otherwise, we could have eaten at places like the rooftop, the classroom, or at the school garden. I wonder how mine appeared in front of me? Did they buy for me or did Haruna bought them when I was busy talking to her? I wonder...

After lunch, the English teacher gave us a surprise test... I wasn't expecting it, especially on the first day back in school. Everyone complained.

The only parts of the question that I understand is the English words in the first question.... I wonder what do they want me to do with those words? And what kind of an English test is this? It's more of translating! On top of that, the English words looks funny.

Well, Haruna indirectly helped me to at least understand what the questions wants me to do and questions that require answering in Japanese and manage to answer all the questions with a lot of time remanding. I took a glance around: it seemed that some gave up, while the rest are still struggling to complete the paper.

Everyone immediately made a sigh of relief. For the rest of the day, it was lesson as per normal. I actually already know what was being thought (except a subject called "National History"). 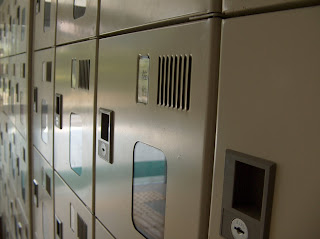 School soon ended, everyone had club activities, but mine was not today. Oh well, I can use this time to be familiar with my surroundings. Knowing that I will spend a lot of time in school later on, I think it would be better if I were to explore the area between the school and home.

I went to my shoe locker near the main entrance of the building and exchanged for the outdoor shoes before heading out of the school gates (there is a large garden in between and a baseball field visible in the distance).

As I'm not practically familiar with everything around me, including the way home, so I'll just stick to that for today. 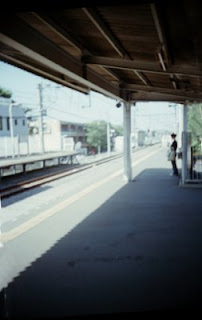 I reached the train station near the school. I looked at the map and realise that my house is actually quite far. I was thinking of bringing the bike all the way to school, but I guess the distance is too far. (Bringing bikes onto the trains are not allowed, but wheelchairs and prams are).

I wonder why Haruna picked a school so far away? Hmm...

I don't really know how long it took for me to get to school as I was too busy getting used to the surroundings and Yukari keep talking about stuff like Anime that I didn't keep track of time.

I reached the station near my house, collect my bike, bought food for dinner later on, and went home. 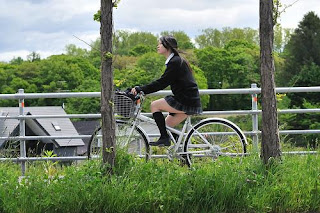 I reached home and parked the bike against the wall outside, went inside, put dinner in the kitchen, and then head to my (Haruna's actually) room. I realised that there are a lot of difficult books on the shelf (at least on the outside). Past test papers that Harka did were placed in several files (sorted and colour coded by subject) on the study desk and the older ones in the bookshelf. I looked at the grades and was shock to see that on most of the test, she scored nearly full marks. On closer look, the questions asked (including recent test papers) were something that I had learnt a long time ago and could have received full marks if I had taken it now.

Again, I have to remove this clothing than is somewhat different from what I'm used to and into another set of clothes. The awkwardness of wearing them still lingers in me.

Since my dinner does not require much preparation, I looked around the house for anything interesting. If I'm not wrong, there should be a guest room somewhere. Let's see, my room.... Haruna's parents room.... the bathroom...... storeroom (it looked as though it used to be a bedroom like mine) ..... must be that remainding room on the 2nd floor.... 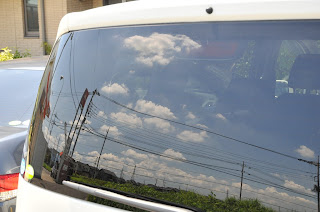 I entered the room. There was nothing out of the ordinary, though I did find things that my parents thought they had lost like credit cards, and old photo of me with Haruna, our parents and late grandparents, and 2 other people that looked older than us but younger than our parents. Who are they?

I headed to the kitchen to have dinner, took a bath, did my homework (which was easy) and then went to sleep.