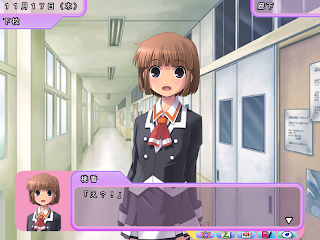 I like playing visual novel games, but due to the lengthy time it takes to complete a game, I had only completed 2 out of the many I have played so far, abandoning the rest. And that is when I fast forward and selecting random choices that appear.

It wasn't long afterwards that I heard from elsewhere that the options that would appear and when that option was selected in a typical visual novel, would affect the entire storyline. One example is School Days, where they have various different endings from the main character choosing person A/B/C as someone they like, to person B commiting suicide or killing A.

At the crossroads where the options appear, it's not clear how that option could affect the rest of the story and to what extent. 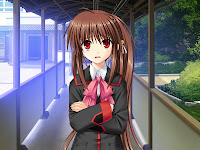 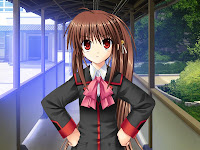 One option can make the difference between that someone liking you or hating you. In some games, not selecting an option for a period of time itself is considered an option.

The typical visual novel is told from the view of the main character (usually male) and does not have a voice for it (though the text do appear as normal) unlike other characters. You can save the game at any time (except for a few). Useful if you want to continue later on or want to explore the different options that had/would appear. There is also an option to fast forward, or view earlier display text. You can also hide the on-screen text (like the one with 棗鈴/Natsume Rin above) to just show them and the background with one of the menu options or a keyboard button (usually the spacebar).

Do note that you may also need fonts and need to change the code in the "advanced" tab of the "regional and language options" in order to display the text correctly. 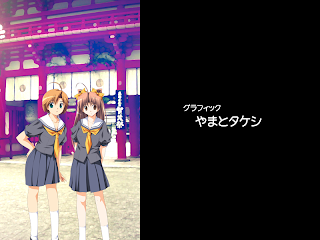 Reaching one of the many possible endings of the game can take a long time, but very rewarding.

In my opinion, the graphics are actually nicer than the anime adaptation of the same name. The same applies to manga. Well, anime does have it's standards and limitations, like except for 1st, last and special episodes, there would be usually an opening and ending that would last about 1min 45sec each and the overall length  (including OP and ED but excluding ads) is about 23-25mins. OAV (original animation video) lengths that are not found on TV and are included only on DVD (VHS and Blu-ray too) can vary, though most are about the same as the TV ones.