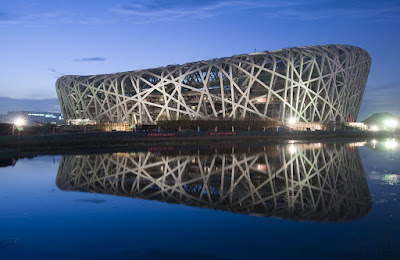 As at any Olympic event, watching a live broadcast of any event can be nerve-wrecking. Even more if there are people there representing the country or that I would know.

I have also witnessed several world/Olympic records being broken (or close to), some of which has not been broken for many years. Regardless of their nationalities and race, some events can be happy, while some can be heart-breaking, or are just full of unexpected turns. Some examples include last night's Men's 100m sprint semi-finals and finals. (Forgive me if I'm rude, but I can't help to notice that except for a Japanese man (who came in 2nd last in the 2nd semifinals), everyone seems to be of African-origin) 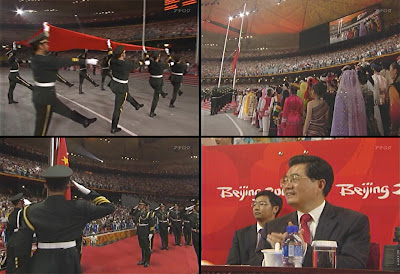 Well, watching the award ceremony (like the 50m Women's freestyle I watched earlier) can be quite emotional. 3 people standing there standing in front of the cheering crowd receiving their bronze, silver, gold (along with a boutique of flowers) from an IOC official followed by the national anthem (instrumental) of the gold medalist. I don't know what happens behind the scenes later on: could be a once-in-a-lifetime job opportunity, receiving an undisclosed sum of money or something. Well, good luck everyone!

I never got the chance to watch the opening or closing ceremony in full, including the previous ones in Atlanta (1996), Sydney (2000), and Athens (2004). Hope I would for the closing and for the upcoming ones like the one in London (2012). Speaking of the opening ceremony in Beijing, they certainly pick an auspicious day (08-08-08 / 8th August 2008) where the number 8 (八) is considered lucky in Chinese. 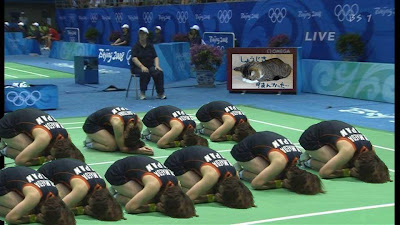 Seeing at how useless my body is in sports and not being able to support the expenses involved if I were to buy a ticket, I don't think I would be able to watch it live in person. The closest is the high-definition broadcast with surround sound. The venues are usually somewhere very far away and would take more than 6 hours to get to. Ones in Europe, Africa and the Americans would take an even longer time, possibly by an entire day.